Ecolonisation and the Creation of Insecurity Regimes: the meaning of Zimbabwe’s land reform programme in regional context 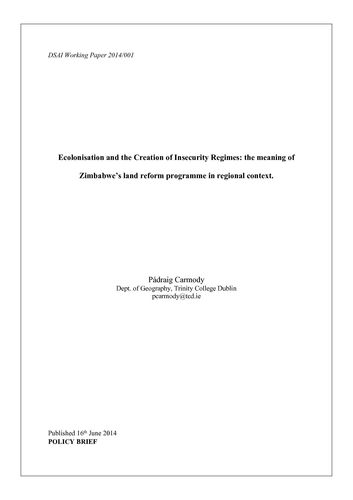 According to a variety of commentators humanity now exists in, and reproduces itself through, a global informational economy. However, from continent-wide land grabbing to Zimbabwe’s recent experience, land retains it centrality in African political economy. As the majority of the population of the continent derive their livelihoods from agriculture - in the Zimbabwean case 70% (Pazvakavambwa 2011) - this is perhaps not surprising. The land question is a fundamentally bio-political one, intertwining as it does power with survival. The classical agrarian question revolved around the extent to which capitalist social relations of production would penetrate agriculture. The round of large-scale land acquisitions currently taking place across the continent would appear to answer this question, however Zimbabwe’s recent experience seems to offer a counterpoint. This paper explores the extent to which Zimbabwe’s experience can be considered unique, as it underwent a process of deindustrialization and reagrarianization, or the extent to which it is representative of broader political power dynamics and processes of ecolonisation at play in the Southern African region.

In terms of lessons for Irish Overseas Development Assistance Policy, the paper suggests that despite the recent reorientation towards trade and foreign direct investment promotion the composition of these and how they are generated are important. Large-scale (foreign) agro- investment may result in population displacement, with attendant negative consequences for livelihoods, poverty and inequality. On-the-other hand despite many negative consequences and impacts, Zimbabwe’s downward redistributive land reform has also had some benefits for landless and land poor peasants, even if these were incidental to its fundamentally political logic. In terms of development policy and overseas development strategy this suggests the importance of careful analysis, attention to local agro-ecological conditions and and the importance of asset redistribution, not just capital accumulation.