An Indifferent Society and an Uncaring State in India 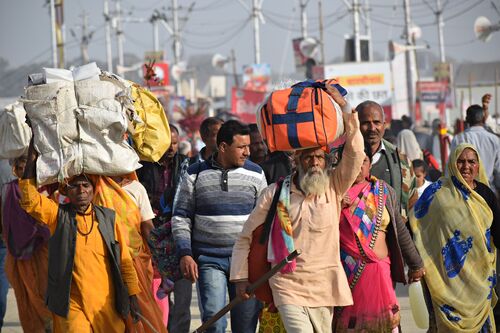 Notwithstanding late COVID-19 mitigation measures taken by governments and commendable services being rendered by some individuals, communities, and Gurudwaras (Sikh temples), the plight of migrant workers continues unabated.

While the middle classes, the main support base of the ruling dispensation at the center, are a busy lot singing paean to the virtues of observing the rules of the lockdown, the last two months have exposed the hollowness of the public policy concerning workers in the informal sector. Lakhs of stranded laborers are faced with a bureaucratic juggernaut and mismanagement, and hundreds continue to perish on their way back home. Those who have been able to make it have to face abysmal conditions in quarantine centres. Amidst speculation about the authenticity of the data, the ferocity of the virus in India remains untamed.

Societal indifference to the lesser mortals and the callousness of the state to the woes of the less fortunate is not new in our society. The unique gift of the ancient Indian civilization to humanity in the form of the supremacy of the Spirit, the Brahman, the Absolute Reality, and the illusory nature of the external world sat comfortably with the hierarchical nature of Indian social organization with the priestly and the warrior castes at the top of the hierarchy. The world view springing from Brahminism accorded inferior status to people engaged in menial work and production on whose toils the Brahmins and the Kshatriyas lived on and thrived. The resulting social and political arrangements were inegalitarian and unjust. It is this world view and social organization that came under challenge from Buddhism, which questioned birth-based privileges and propagated the universality of human nature and experience. As we know, subsequently, the influence of Buddhism waned, and Brahminism again gained ascendance. The hierarchical nature of Indian social organization remained more or less intact through foreign conquests and around two hundred years of British rule. In modern times Mahatma Phule, Babasaheb Ambedkar, and Gandhi relentlessly fought against the evils of the caste system and tried to reform Hinduism. As Sujatha Gidla has elaborately documented in her book, Ants Among Elephants: An Untouchable Family and the Making of Modern India, even conversion to a more egalitarian religion like Christianity could not stamp out the label of caste, which even has operated in subtle ways in the Indian communist movement such as in the Telengana rebellion of 1946-50[1].

Atrocities against Dalits in our everyday social life, caste-based discrimination in our institutions, and exclusion of vulnerable sections from the public sphere is a fact of contemporary India.

Most of the migrant workers come from less developed states like Bihar, Jharkhand, West Bengal, Uttar Pradesh, Madhya Pradesh, and Odisha. They have been compelled to move out of their homes in search of livelihoods to the more developed regions of the country. They belong to the lower strata of our society. Almost invariably, they face harsh working conditions and work long hours for paltry sums. The abysmal living conditions of the informal sector workers and those living on the margins of our society fail to prick the conscience of the middle classes who treat them with contempt and condescension. In the imagination and consciousness of the middle classes, their needs, as against our needs, are limited to meeting the basic needs of life. This is aptly captured by political theorist Rajeev Bhargava in his ‘sub-human’ thesis (“Vividly imagining the life of migrant workers”, The Hindu, April 29, 2020). Bhargava argues that the image that we have of ourselves and our needs is very different from the conception that we have of the poor and their needs. We tend to view them "as laboring creatures with basic material needs who beget children". And we feel content with empathizing with them when they are deprived of these basic material needs. In contrast, our needs are more complex and varied. Thus, he concludes: “…unless policymakers have the same conception of the poor as they have of themselves – persons with varied and complex needs – they will not realise the grave consequences of the material deprivations endured by the poor or show the urgency to remove them”.

The nature of the Indian state has been variously theorized by the scholars of Indian society and politics.

Gunnar Myrdal famously described it as a ‘soft state’ in his classic Asian Drama. It was an authoritarian state that presided over the era of “the Emergency” in the 1970s. The Indian state has also been characterized as a 'weak state'. Prabhat Patnaik felt that the state was assuming authoritarian postures during the phase of globalization and the liberalization of the Indian economy. With the BJP in power at the center, the state has displayed clear majoritarian tendencies. For Christophe Jaffrelot, it is ‘Hindu Rashtra, de facto’ (“Hindu Rashtra, de facto”, The Indian Express, August 12, 2018). Political scientist Ashutosh Varshney feels convinced that the second term for the BJP at the center in 2019 heralds the creation of ‘a Hindu majoritarian state and polity’ (“Transfiguring India”, The Indian Express, May 27, 2019).

Whichever political party is in power, planning and policy-making in India fails to focus on the needs of the poor and workers in the informal sector, and this has been a monumental failure of the Indian state.

The recent past has seen rising levels of heinous crime against women, children, and minorities. The rise of vigilantism during the BJP rule allowed hate crimes to be committed against minorities with a sense of impunity. This unprecedented brutalization of our society went on side by side with numbing of our conscience until pent-up frustrations erupted into protests against the National Register of Citizens (NRC) and Citizenship (Amendment) Act, 2019 at the beginning of this year. The protests reaffirmed our civilizational values of humanism and inclusion. They also reasserted the vibrancy of our civil society. A vigilant citizenry is the price that a society has to pay for holding those in power accountable and for ensuring the democratic nature of the state.

Lockdown as a result of Covid19 has meant different things for different sections of our society. For the middle classes, it has meant working from the comforts of home, quality time with family, leisure pursuits, online classes, yoga and exercise, entertainment, etc. For the workers in the informal sector, it has meant the loss of livelihoods, harassment by landlords, police excesses, suffering, drying up of savings, and starvation.

Lockdown stripped migrant workers of their dignity and basic human rights. There has been a silver lining in the form of yeoman’s service being rendered by some public-spirited individuals, communities, Gurudwaras, and NGOs. However, these acts of kindness and compassion located in civil society can only supplement and can never supplant public policy.

Gidla, Sujatha. 2017. Ants Among Elephants: An Untouchable Family and the Making of Modern India. Farrar, Straus and Giroux, New York.

[1] Telangana movement refers to the recent movement for creation of separate state. Telangana rebellion or the communist movement (1946-51) was peasant rebellion against landlords and Hyderabad princely state; it was engineered by the Communist Party of India (CPI).

Image by Rajesh Balouria from Pixabay