The infection rate of the pandemic in dense cities 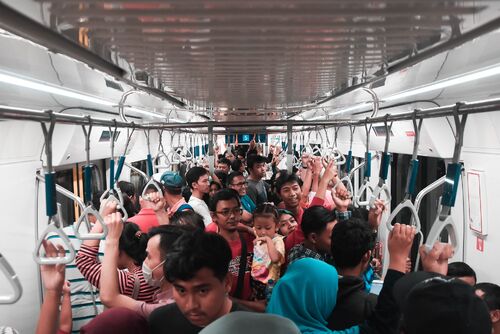 Findings from some research show that there is a relationship between the number of COVID-19 cases with building density, population density, and public transportation availability.

In Indonesia, an analysis from the Department of Geography at the University of Indonesia found that densely packed neighborhoods in big cities are particularly more vulnerable to COVID-19 transmission.

In Bandung-Capital of West Java, most vulnerable areas are identified in that concentrated in the center of the city. This city has an average population density of 14,000 people/km2. The densest neighborhoods are located in some sub-areas near the city center. The stack of public facilities (including public transportation hubs) in these areas has led to the concentration of density and activity and the rise of slum housing and overcrowded settlement. This situation brings the risk of COVID-19 transmission to other areas in the city and could widen the extent of vulnerable areas.

In Jakarta, this city has a high building density and an average population density of 16,000 people/km2. The particular sub-districts with the highest building density and population density are Cakung, Duren Sawit, Tanjung Priok, Pademangan, and Palmerah. These areas also have dense-packed public transportation hubs. It makes these sub-districts are the most vulnerable areas in Jakarta that have a higher risk for COVID-19 transmission. Official data per 12 May shows that Tanjung Priok and Duren Sawit are two areas with the highest COVID-19 infections in Jakarta.

The same pattern is also proven in other big cities in Indonesia, Wuhan, and Hong Kong where the disease’s epicenter was in the housing estate. These cities are amongst the most densely populated and unequal cities in the world. Two-thirds of the total population of the country live in urban areas. The way cities densify and expand plays a huge role in the spread of infectious diseases. These cities with people living in proximity have enabled the fast spread of disease, with most of the risk burden falling on slum dwellers.

Prevention of infection and control measures must be based on sound scientific principles. Concerning the analysis above, two policy alternatives are suggested to control COVID-19, especially in dense cities.

First, the government needs to upgrade the existing COVID-19 information system by adding an analysis of the density of population, buildings, and public transportation hubs; to show the degree of vulnerability of each area/neighborhood.

Then, this information dissemination must be done more effectively. Non-state actors and epidemiologist must help to disseminate the information to the general population, so they can take part in examining themselves and avoid contact with vulnerable areas.

The information dissemination must be followed with efforts to raise public awareness and encourage the community to avoid and minimize contact with people in/or from the vulnerable areas. For example, state/non-state actors should restrict mobility between dense cities, implement strict migration surveillance to individuals returning home from dense cities, and apply sanctions to those who violate the restriction.

Previous research indicated that sustained 90% travel restrictions to and from vulnerable areas modestly affect the epidemic trajectory unless combined with a 50% or higher reduction of local transmission in the community. Therefore, across the dense areas within the city, there is also a need to limit human-to-human transmission by reducing secondary infections among close contacts and health-care workers, preventing transmission amplification events, and reduce transmission from the animal sources.

Second, a COVID-19 test is required in all potentially vulnerable areas.

The government must utilize rapid and high detection performance tests such as PCR to differentiate accurately infected and non-infected individuals. After the identification, isolation with optimized care for patients must be provided in each vulnerable area.

The abovementioned efforts require intensive use of science and technology to address crucial uncertainties such as the extent of transmission and infection and the development of diagnostics as well as treatment options. These efforts can be supported by multisectoral collaborations among or between local/national institutions with international organizations.

In the long term, to minimize social disruption and economic impact of a pandemic, urban regeneration is required for dense areas.

These areas must also develop solutions to strong disease detection and response systems to rapidly control emerging infections. Modern cities are better able to leverage technology to strengthen the monitoring of cases and populations at risk and create strong communication channels for building awareness and avoiding panic among residents. Cities need good design and infrastructure. Smart urban regeneration is required, not only managing density, but also human behavior that facilitates the spread of diseases. A neighborhood with low density still could lead to a dengue outbreak, if no one picks up their waste.

Ibnu Budiman is a researcher and consultant in the field of environmental management and sustainable development. He has published more than ten high impact academic articles, policy reports, op-ed pieces, and book chapters on a variety of environment and development issues. Ibnu is a Ph.D. candidate at Wageningen University.