Decentralization, Corruption and governance in Afr... 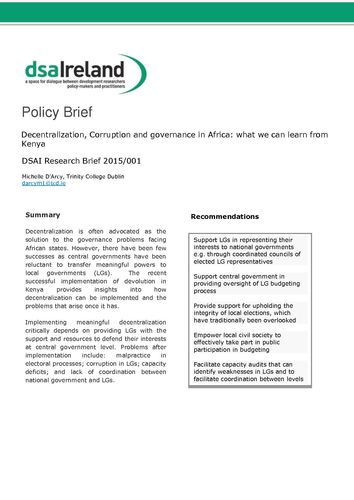 Decentralization is often advocated as the solution to the governance problems facing African states. However, there have been few successes as central governments have been reluctant to transfer meaningful powers to local governments (LGs). The recent successful implementation of devolution in Kenya provides insights into how decentralization can be implemented and the problems that arise once it has.

Implementing meaningful decentralization critically depends on providing LGs with the support and resources to defend their interests at central government level. Problems after implementation include: malpractice in electoral processes; corruption in LGs; capacity deficits; and lack of coordination between national government and LGs.