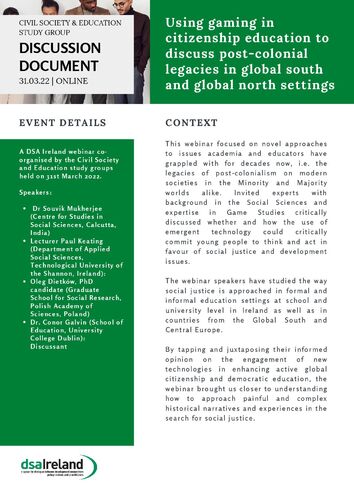 A DSA Ireland webinar co-organised by the Civil Society and Education study groups held on March 31 2022 focused on novel approaches to issues academia and educators have grappled with for decades now, i.e. the legacies of post-colonialism on modern societies in the Minority and Majority worlds alike. Invited experts with background in the Social Sciences and expertise in Game Studies critically discuss whether and how the use of emergent technology could critically commit young people to think and act in favour of social justice and development issues.

Dr Souvik Mukherjee shared the link to a book he contributed to: “Video Games and the Global South” (edited by Phillip Penix-Tadsen, ETC Press 2019). The pdf of the whole book can be downloaded for free from: https://press.etc.cmu.edu/index.php/product/video-games-and-the-global-south/

Dr Souvik Mukherjee is assistant professor in Cultural Studies at the Centre for Studies in Social Sciences Calcutta, India. Souvik’s research looks at the narrative and the literary through the emerging discourse of videogames as storytelling media and at how these games inform and challenge our conceptions of narratives, identity and culture, especially in Postcolonial contexts.  Souvik is the author of two monographs, Videogames and Storytelling: Reading Games and Playing Books (Palgrave Macmillan 2015) and Videogames and Postcolonialism: Empire Plays Back (Springer UK 2017). He is also the co-editor (with Dr Emil Hammar) of the special issue ‘Postcolonial Perspectives in Videogames’. Souvik was named a ‘DiGRA Distinguished Scholar’ in 2019 by the Digital Games Research Association (DiGRA).

Paul Keating (Department of Applied Social Sciences, Technological University of the Shannon, Ireland): How gaming is informing young peoples' understanding of the Global South and how this medium can be used to promote engagement with a postcolonial critique of Oppression and Development.

Paul Keating is a Researcher and Lecturer in the Technological University of the Shannon based in Tipperary. With a background in Rural Development and Engineering he has worked as a Community Worker in Ireland, across the EU, East Africa and the Balkans for over 20 years. In recent years Paul has partnered with the National Youth Council of Ireland and Youth Work Ireland, exploring and developing the use of games in youth work practice particularly as it related to development education He has also partnered with international NGOs such as Trocaire in integrating games into their development education programmes. Paul is currently completing a Doctorate in the use of Multiplayer Online Computer Games in Critical Pedagogy.

Oleg Dietków, PhD candidate (Graduate School for Social Research, Polish Academy of Sciences, Poland): Learning through games, play and sport – a historical and theoretical analysis of what games are and what they can tell us about humans, learning and identity.

Oleg Dietkow is a PhD candidate at the Graduate School of Social Research at the Institute of Philosophy and Sociology PAN in Warsaw, Poland. Oleg’s history with gaming stretches back to his early teens, when as a young player and programmer he helped develop elements of the globally popular game DOTA and took part in the development of the Tower Defence genre. As a pro gamer, he played for some of the best guilds (teams) in World of Warcraft. His early work as a sociologist revolved around social groups and online movements (such as Anonymous and Gamergate) and later transitioned into work on social trust and its relation to subjective measurements of happiness. His PhD addresses the questions: what is a game, how people engage with games and how games and gaming culture shaped individual understanding of reality and identity throughout history and today.