June 2018: Gender justice: an adequate frame for the empowerment of women? 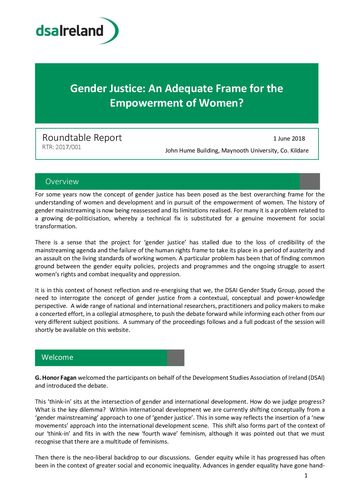 GENDER JUSTICE: AN ADEQUATE FRAME FOR THE EMPOWERMENT OF WOMEN?

DSAI in association with MUSSI and 3U Global Health

This workshop was attended by over 50 participants from the worlds of academia, NGOs and policy makers. Speakers delivered, in an engaging and participatory way, a rich programme of ideas and papers for discussion.

The workshop examined how the concept of gender justice has been posed as the best overarching frame for the understanding of women and development and in pursuit of the empowerment of women. The history of gender mainstreaming is now being reassessed and its limitations realised. For many it is a problem related to a growing de-politicisation, whereby a technical fix is substituted for a genuine movement for social transformation.

There is a sense that the project for ‘gender justice’ has stalled due to the loss of credibility of the mainstreaming agenda and the failure of the human rights frame to take its place in a period of austerity and an assault on the living standards of working women. A particular problem has been that of finding common ground between the gender equity policies, projects and programmes and the ongoing struggle to assert women’s rights and combat inequality and oppression.

It is in this context of honest reflection and re-energising that the DSAI Gender Study Group, posed the need to interrogate the concept of gender justice from a contextual, conceptual and power-knowledge perspective.  A wide range of national and international researchers, practitioners and policy makers made a concerted effort, in a collegial atmosphere, to push the debate forward while informing each other from our very different subject positions.

This report on proceedings summarises the event and key findings.